The Ferdun Conservation Award commemorates the steady, committed and visionary work of Gareth and Georgenne Ferdun, two of the founders of Lower Nehalem Community Trust. We present this award at our premier fundraiser and gala in the garden, Living Locally, which takes place in our Community Garden in spring.

Since 2014, the Trust has presented this award to a local citizen who exemplifies the Ferduns’ spirit of conservation and deep love of the North Coast. This year’s recipients are… 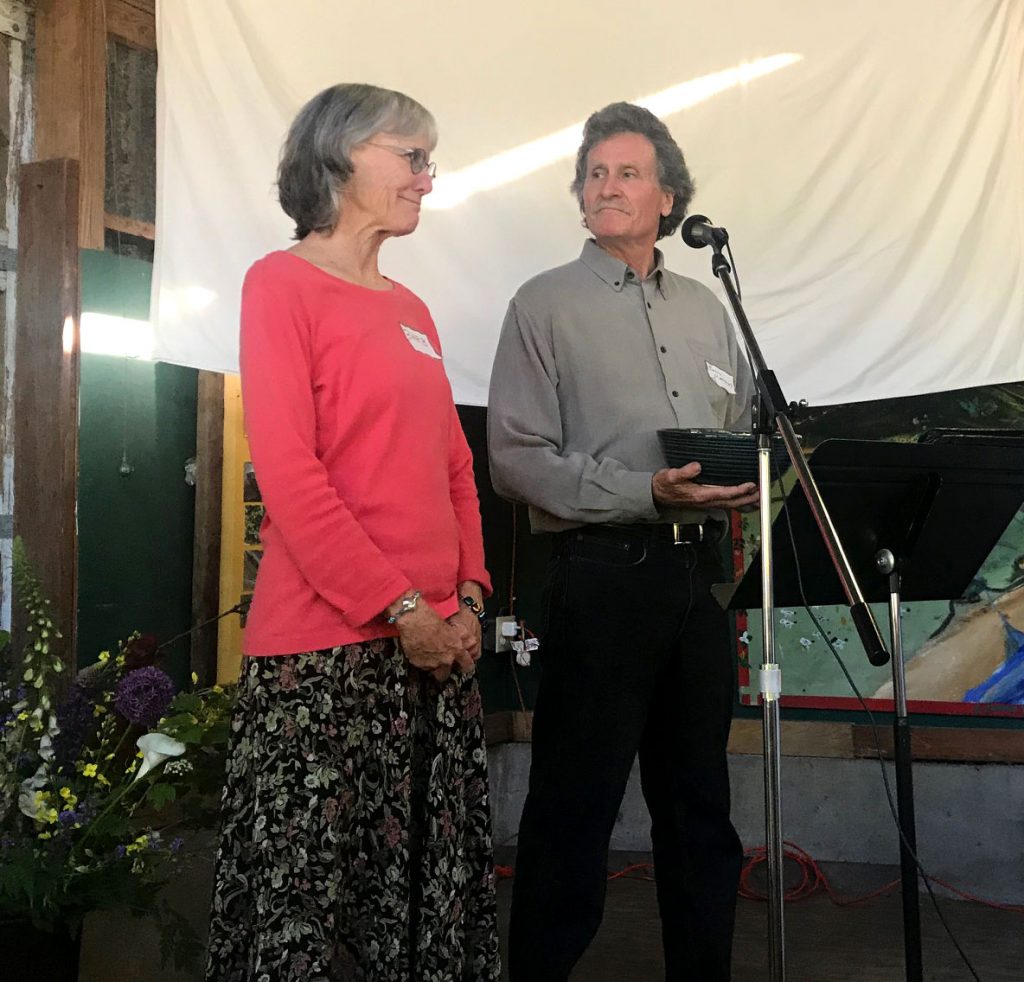 Two of the community’s most cherished and dedicated volunteers, Barbara Rippey and Barry Marshall. The Bees or B&B, as they are known with great affection throughout the Nehalem Bay community, lead by example. Whether it’s working in the Hoffman Center gardens, planting trees for the Watershed Council or taking on any of a multitude of necessary tasks for the LNCT, they can be oucnted upon to show up. They perform their work with competence and intelligence, and bring a nuanced understanding of the consequences of the work to the people and place in which we live.

Well travelled and keen observers of how the world works, the Bees are skilled in disciplines as diverse as land surveying and organic food production and the necessary hands on work to get the job done. Its long been a mystery to most of the community as to from what deep well they get the energy to provide so much of themselves to this community, both to its institutions and to its individual members. To count yourself among their friends is an honor, and their circle of friends is large indeed.

The Trust is honored to acknowledge Barbara and Barry and their great contribution to defining community while inspiring others to do more to create a livable reality.

Past recipients of the Ferdun Conservation Award:

Lower Nehalem Community Trust is pleased to honor Peter Walczak’s contribution to our understanding the need and reward of conservation by awarding him The Ferdun Conservation Award for 2018.  Thank you, Peter, for years of committed service to the Community:

For the past 30 years the youth of the Nehalem Bay Region have been blessed with Biologist Peter Walczak of Nehalem, who began his work as a fisheries and marine scientist during his three-and-a half year Peace Corps tour at the Iran Fisheries Research Institute and the Iran Department of the Environment.  After finishing with the Peace Corps, he worked at the New York Science Lab, then for close to 10 years as a Fisheries Expert for United Nations in the Food and Agriculture Division.

Upon returning to the Northwest and settling in Nehalem, Peter discovered a real need for hands-on science education in the local school district.  He went on to combine science literacy with fieldwork for kindergarten to 12th grade students in the Neahkahnie School District.

Never missing an opportunity to connect the dots of science to their day-to-day existence, Peter has the gift to open the eyes and hearts of children to the natural world in a way that helps them understand their roll in it. Many local children who have gone on to work and pursue higher education in science credit Peter with inspiration for their choice. For children of all ages, a walk in the woods or along the shore is a magical experience.

Gwendolyn Endicott is a fourth-generation Oregonian. She spent most of her childhood in the forests of Oregon and developed a deep connection with them. As she reached retirement age she discovered a beautiful forest property outside of Nehalem and acquired it to learn about it, experience it more deeply, and protect it forever.

As the late Kathleen Ryan wrote: “Gwendolyn has documented the various flora and fauna on the acreage and kept track of rainfall, weather patterns, and swollen streams. She has partnered with the Watershed Council to restore fish habitat. Gwendolyn is also a shaman who shares the knowledge of our many spiritual connections to the land and its seasonal rhythm. Her inspired publications tell the ancient stories of understanding our creation myths and how the earth nurtures us.”

A tireless advocate for wetlands and ocean conservation, George Hemingway was past chair of the Lower Nehalem Watershed Council. George left a legacy that will long be remembered.  He and his wife, Jean, moved to Nehalem after retiring in 2006. George assisted in ministry at the local bilingual congregation of St. Catherine’s. He enjoyed fishing, gardening, exploring the natural environment, and researching family history. He was passionate about learning, about protecting the coast’s amazing natural resources, elevating his community, and making friends with people of all backgrounds and experiences.

2015: Doug Firstbrook – a founder and past president of the LNCT Board

Champion of all species in our region, Doug helped found Lower Nehalem Community Trust and conserve Alder Creek Farm. He also organized the first Bay cleanup and was one of the founding members of the Land Trust and served as its chair. Beyond all that, he has spent countless hours in hands-on labor building bridges and fences, making trails, planting trees, making videos, and shoveling muck.
As Gwendolyn Endicott pointed out, “This is one fellow who is always out there working for the health and preservation of this watershed.”

Neal Maine was the first recipient of the Ferdun Conservation Award. After a thirty-year career as a biology teacher at Seaside High School, he became the first executive director of North Coast Land Conservancy, which he co-founded in 1986. Since his retirement from the land trust in 2010, he has pursued his passion for nature photography dedicated to raising awareness of coastal ecology, wildlife, estuaries, freshwater wetlands and forests.

Get our eBulletin about events, progress, and community gatherings.

DONATE
VOLUNTEER
GIVE LAND
JOIN THE GARDEN
Our mission is to preserve land and nurture conservation values in partnership with an engaged community in the Nehalem region of the Oregon Coast.